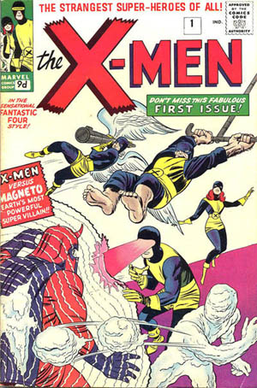 X-men was the first ever comic book to introduce the idea of Mutants, humans who are born with an X-gene, which gives grants them natural superhuman abilities. #1 of X-men marks the first appearance of mutants like Professor X, Magneto, Iceman, Angel, Marvel Girl, Cyclops, and Beast. Created by Stan Lees and Jack Kirbys in 1963, this comic did not receive a warm reception from comic lovers and was canceled in 1970. Interest rekindled in 1975 for X-men, and it eventually became a huge success, with millions of fans around the world. Mutants also later appeared in many books, TV shows, and movies. A near-mint copy of this issue attracted many bids on Comic Connect and was finally sold for $807,300 in June 2021.

“Magneto debut” By (Fair use) via Commons Wikimedia